Dear Readers,
I have been on a real finishing streak lately, seems like there is nothing like wanting to work on some new projects to inspire completing some old projects! (I have a lovely custom storage cabinet gifted to me by my Dearest, but 8 bins of started projects is enough) [ok there are some in bags too, shhh ;) ]
But more importantly, I have been exploring my creativity with less judgement, and that has really taken the brakes off of wanting to make beautiful things!

Another thing that has helped is getting the EQ7 software in July 2014. It's totally better for me than graph paper. I love being able to adjust sizes to fit the fabric I have on hand, and creating my own quilting templates and labels.

A few quilts DID get done in the last four years, and I will write about those eventually, but I'm going to start with the recently finished ones first, and to heck with the chronological order!


A QUILT FOR A FRIEND'S FIRST GRANDCHILD
Flannel front and fleece back, made from an adorable large panel and a matching border print. I'm just crazy about mitered corners lately, and trust me, use your ruler to mark a good line, don't try to 'eyeball' it!
I outline quilted the printed blocks and did my own design [also drawn in EQ7] in the two outer borders. I am really happy with how it turned out!  It was good practice on free motion quilting. 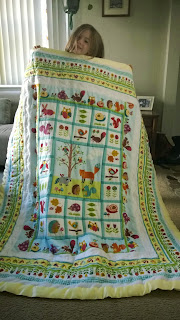 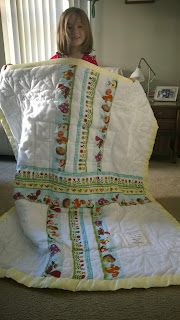 [A note to my gentle readers: This post was drafted in April 2011 but my feelings are the same. After a lengthy absence I would like to resume my writing practice, so welcome back everyone!]
Ah, Spring...when a quilter's thoughts turn to her garden...

The first sign of Spring in my house is the arrival of the Burpee Seed Catalog [www.Burpee.com].  They are a local company with a long history of providing wonderful seeds and plants to agricultural giants [like my wonderful father-in-law who feeds his family all year from what he grows] and to amateur dirt scratchers [like myself  ;) ].

Sometimes I think I garden because I like to have an excuse to be outside listening to the birds singing!

After 7 years now of planting, my small garden is starting to really shine.  I love seeing the perennials reappear, it's like meeting friends who have been away for a while,  or like emotional encouragement that the cold seasons do end and life goes on...  And when the bulbs start multiplying, like my own family grown now from 2 to 3, I like to think they are happy and thriving here outside our home as we people are inside it.

I love all the different colors and shapes and scents and sizes - A long time ago, in another home, before meeting that sweet fellow who would become my Dear Husband, I wanted an all white garden.  All different flowers, but all white.  A symbol perhaps, of the pale shroud of my life at that time?  An attempt to control my environment when I couldn't control much else?  Maybe...but now the entire rainbow is invited to the garden party and it's so beautiful [even if I have a harder time narrowing down my catalog choices!]
Posted by Suzanne at 10:53 AM No comments:

So not knowing what I *didn't* know  ;)  I jumped right into my first quilt.

I wandered the quilting fabric section at JoAnn's [if you haven't already, sign up for their mailers and get a 40% off coupon twice a month!] and found my inspiration: tiny pink piggies!!!


My sister-in-law Tiffany loves piggies, so therefore my first quilt would be for her.  [It could just as easily have been any of you other dear readers so don't be jealous.]
Quilters call this type of fabric the 'focus fabric' and base the rest of the quilt around it, so that's what I did too.  I can't remember now when I started, but it was while she was house-hunting, because I intended to give it to her as a gift for her new home, and the quilt was finished in July 2007: 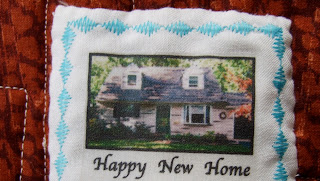 With this label I played with the embroidery stitches on my sewing machine to make a border, and made several tries with the iron on transfers until I realized you have to mirror-image the photo and text.

I used a relatively simple 9-patch pattern for the front:


Keith helped me with the final pattern selection and the size of the light blue accent border and binding.  He's like an editor for me that way, which is a nice part of our partnership because he lets me edit his writing sometimes, too. I thought it turned out really nice!  :)
But I couldn't let the back just be 'plain', and it kept me up nights trying to solve the puzzle of how to get as much of the piggie fabric in one piece as I could until I literally sat up in bed in the middle of the night with the solution:
Because of the pieced back I chose what I thought would be a 'simple' pattern to quilt in the border: 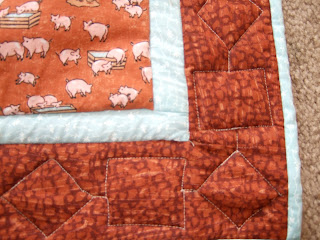 But it was extra hard to quilt it because I added batting AND and a flannel blanket in between, making it extra thick for Tiff because she likes to be cozy.  Then I marked it with a chalk pencil and the marks got brushed off as I was moving the quilt around to sew.  Also I used my shiny new 'walking foot' which really isn't made for such small motifs.  So it was really frustrating I learned a whole lot while making this quilt.
*But that's not the best part!  The best part is that I bought this fabric before she bought her house and my quilt totally matches the colors of her living room!  And now Tiff can never redecorate, unless it matches my quilt...ha ha - just kidding [mostly!]
I love my sister-in-law and I love that she loves the quilt I made for her, even though it wouldn't win a blue ribbon at the fair, because I'm not perfect either and she loves me too!
Posted by Suzanne at 2:55 PM No comments:

Hello Everyone and welcome to my page. 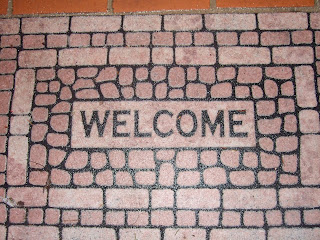 This will be a place to share my creative efforts in fabric, gardening, living, and other musings.  I may even have some of my delightfully talented friends stop by to post on occasion about their creative outlets.

I will be posting pictures of my quilts in the order of their completion, and I hope that this is going to be a very busy year for me ;)   Wish me luck!  I have two to give away in April (so they had better be ready soon!), one 'quick' blanket to appease my daughter who wants to keep all the ones she sees me make, two more for my twin nieces which have been in the works since before their first birthday (and now they are ready to enter kindergarden), one started with the 'extra' pieces of those two, fabric bought and patterns decided for 3 more, with ideas for 3 others...plus whatever inspirations arise along the way!  Ah, we quilters are quite a handful  :)  Imagine all the trouble we would get into if not for our fabulous obsession!

While my maternal grandmother earned a living my sewing in a factory and my stepmother sewed many beautiful special occasion dresses for me as I was growing up, I never took much to fabric, preferring instead to play with yarn (knitting and crocheting), or jewelry-making with wire and beads.

I discovered quilting in 2007 when I was first trying to get pregnant.  At the time our church was starting a baby quilt ministry and I was looking for a new skill, greater connection to the women in our fellowship and a way to begin leaving a tangible legacy of objects.  These wonderful ladies were a great comfort to me as I endured two first trimester miscarriages and then the successful full term pregnancy with my daughter.  They also made a beautiful quilt for her, which they all signed: 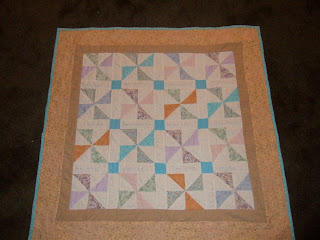 I was totally hooked on quilting by then.  I love the whole process, from the initial inspiration to the final stitches on the label my Dear Husband designed for me.  And I love how there are as many ways to quilt as there are quilters, and how I learn from each one I meet and each quilt I finish.  Thank you for joining me in this next phase of my life, making the world warmer and more beautiful one quilt at a time...
Posted by Suzanne at 5:47 PM 1 comment: